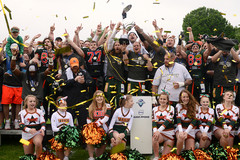 Kiel, 28.06.2015 – In an exciting match against the Allgaeu Comets the Kiel Baltic Hurricanes were able to defend their EFL Bowl title with a 49:28 win (7:9/21:6/7:7/14:6) on Saturday at Kilia Stadium. In front of 1,725 football fans the two teams played a hard-fought game which was presented by Kiel’s car partner HUGO PFOHE. The final of the European Football League started ceremonially with marines of the navy battalion Eckernfoerde carrying the EFL Bowl trophy into the stadium and the presentation of the official game ball by Hugo Pfohe Head of Branch Office Benjamin Fischer accompanied by two new models of the Volvo XC90. After the Ute Schönherr sang Germany’s national anthem, the game kicked off at 4 pm.

„We knew the Comets were able to put up a ball game“, said Hurricanes head coach Stephen Parker after the game. „We always tell our players to not take any opponent lightly and I am proud that we were able to bring the title to Kiel for a second year.“

The game was hard fought from the start. The first three drives of each team ended in scores with the lead changing five times before Kiel eventually moved ahead. The Comets scored first with a run by quarterback Cedric Townsend after they had crossed the field with runs by Townsend and catches by Christian Hafels. The PAT attempt failed. But the Canes retaliated quickly. Tyler Davis ran for 62 yards for his first of four touchdowns of the day. Julian Dohrendorf kicked the PAT for the 7:6 lead. However, Allgaeu’s Matt Green was able to carry the ensuing kick return all the way back to the Canes’ 16-yard line. Kiel’s defense held the Comets out of the endzone this time, but had to take a fieldgoal to make it 7:9.

With another score by Tyler Davis in the second quarter, the Hurricanes were in the lead again. But only one play later, Comets quarterback Cedric Townsend threw a 57-yard pass to Matt Green for the next touchdown. The following attempt for a two-point conversion failed, yet the guests were up again with 15:14 points. Following a 62-yard kick return by Canes receiver Jonas Brix, Philipp Schulz carried a pass by Blake Bolles the Comets’ 1-yard line and Jaques Huke completed the job with the touchdown. Dohrendorf’s PAT put the Canes up at 21:15. On the next Allgaeu drive, Tyler Davis intercepted Cedric Townsend to give his team the chance to put some distance between them and the Comets. And the Hurricanes’ offense did just that with a pass by Bolles caught in the endzone by Benedikt Englmann for the 28:15 halftime score.

In the third quarter, Davis’ third score led to a 20-point lead for the Hurricanes. However, the Comets never stopped fighting and pressuring towards Kiel’s endzone. Thus, Townsend rushed for another touchdown to make it 35:22. At the beginning of the fourth quarter, Tyler Davis prevented more points with his interception in Kiel’s redzone. Instead, he scored again himself after a long drive by the Hurricanes over the entire field. Dohrendorf’s kick put the Canes up by 42:22. But with a 53-yard pass to Christian Hafels, the Comets were right back in front of the Hurricanes’ endzone and shortly thereafter, the duo Townsend/Hafels completed the drive with a 6-yard touchdown pass. Sharif Bsharat delivered the game’s final score with 7-yard rush and Defensive Back Thiadric Hansen put a lid on the 49:28 when he intercepted Townsend on the Kiel goalline in the very last second of the game.

With this win, the Kiel Baltic Hurricanes celebrated their second european title after winning their first EFL Bowl in 2014.